Findings have implications for freshwater availability and sea levels. 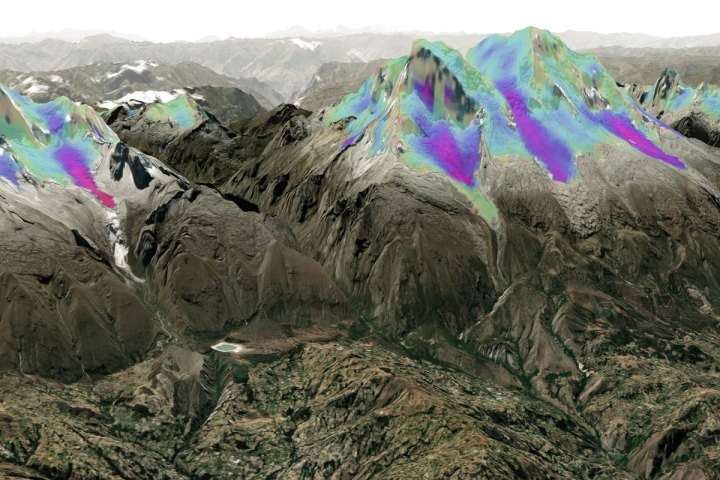 The first atlas to record the movement and thickness of the world’s glaciers gives a clearer but mixed picture of Earth’s ice-bound freshwater resources, according to research from Mathieu Morlighem, the Evans Family Distinguished Professor of Earth Sciences.

Working with colleagues at France’s Institute of Environmental Geosciences (IGE), Morlighem and IGE’s Romain Millan measured the velocity and depth of more than 250,000 mountain glaciers. The resulting research revises earlier estimates of glacial ice volume, now suggesting that there is 20% less ice available for sea level rise in the world’s glaciers than previously thought.

“Many regions around the world have less ice than we thought, and it will have implications for millions of people,” says Morlighem, the lead of the Arctic Engineering in a Period of Climate Change cluster. “Drinking water, power generation, and agriculture are among the essential services that will be impacted by these findings.” The results, published in Nature Geoscience, found less ice in some regions and more in others, with the overall result that there is less glacial ice worldwide.

The tropical portion of South America’s Andes mountains—a major source of freshwater for the continent—was found to have nearly a quarter less glacial ice. The reduction of this amount of water is the equivalent of the complete drying of Mono Lake, California’s third largest lake.

Asia’s Himalayas mountains were found to have over one-third more ice, although the continent’s glaciers are melting quickly.

We generally think about glaciers as solid ice that may melt in the summer, but ice actually flows like thick syrup under its own weight.

The findings also change projections for climate-driven sea level rise expected to affect populations around the globe. The new estimate reduces the potential for glacial contribution to sea level rise by 3 inches, revising it downward from 13 inches to just over 10 inches. Dark red and violet indicate where Patagonia’s Upsala Glacier is moving fastest, with speeds up to about 1 mile per year. (Courtesy of IGE-CNRS, Mapbox, OpenStreetMap, and Maxar)

To create the massive ice flow database, the research team studied more than 800,000 pairs of satellite images. The data was processed using more than 1 million hours of computation at IGE.

“We generally think about glaciers as solid ice that may melt in the summer, but ice actually flows like thick syrup under its own weight,” explains Morlighem. “The ice flows from high altitude to lower elevations where it eventually turns to water. We are able to track the motion of these glaciers from space at the global scale to deduce the amount of ice all around the world.”

The new data covers 98% of the world’s glaciers, finding that many of them are shallower than previously estimated. The new study also eliminates previous double counting of some glaciers.

The resulting global ice atlas includes regions where no previous mapping existed, such as the southern cordilleras of South America, sub-Antarctic islands, and New Zealand.

According to Morlighem and his research colleagues, the estimate of glacier freshwater resources remains uncertain without direct field measurements. The study calls for a re-evaluation of the world’s glaciers in the tropical Andes and the Himalayas, which are major water towers but that remain poorly documented.

“We can now make more reliable projections of how much time these glaciers have left,” says Morlighem. “Even with this research, however, we still don’t have a perfect picture of how much water is really locked away.”